Mr. A. Cat's Verses of the Six Degrees 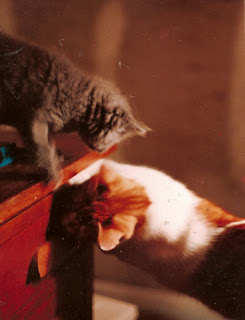 By now you have deduced that Mr. A. Cat is missing in action--M.I.A., as it were--and that Lim and I had all but given up expecting that a missive of verse or limerick would ever arrive. We had unhappily accustomed ourselves to abiding with no hope of a limerick nor even a soft meow from Mr. A.'s direction -- our favorite secret agent formerly in service to our nation, and a feline of many rare talents whose location continues to be unknown, even as I type.

Yet with this morning's light came an announcement from my feline companion Lim that a poem has appeared overnight next to the blue flower pot in the garden shed, a novel delivery method by Mr. A. to be sure but a welcome relief for Lim and yours truly, the typist around here since cats don't have fingers--although Lim is a pretty good speller, I freely admit. (His punctuation ability is quite another matter!)

And so without further ado I shall type Mr. A. Cat's new verses word for word as Lim found them stealthily scratched onto a piece of tree bark though not without some trepidation for Mr. A.'s mysterious inspiration for the rhyme's topic seems unusual even for him. I shall make no comment afterwards for having read them, I really don't know what to say. Still, do peruse Mr. A. Cat's Six Degrees if you dare but please allow the typist's expression of some trepidation to serve as your warning and guide--and...be not heedless:

Mr. A. Cat's Verses of the Six Degrees

was then tossed into gaol

A Bard and poet prophet he

renowned both far and near

Such hallowed halls of Science trod

old Francis and his staff

As followers expand the dream

in pagan hearts a beast to roar

as plainly can be seen

from chaos order is employed

by head of state and Queen

In modern times the game descends

to liars crooks and knaves

who conscience-free purport to be

footloose to dance on graves.

Above image: Topaz as 'Mr. A. Cat' teaches young Lim (Wiley) how to break into a desk leaving no paw prints.