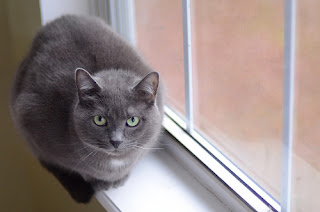 Thrills, chills, but now spills for Herman Cain and here's a cozy Zasha the Russian Blue looking highly critical of the following verse penned by yours truly since Mr. A. Cat seems to have flown the Lim's Limericks coop--my cat Lim hasn't heard from Mr. A. in months--no limerick or nuthin'. Nary a peep.

Actually, I think our fluffy Zasha, sad about the Cain campaign's flop-over yesterday from romantic scandals and sexy accusations, was leaning toward voting for Herman in November 2012 but that's mainly because no one has had the heart to tell her that cats can't legally vote in America...she'll be Very Displeased when she finds that out...

We say Farewell to Herman Cain
whose sins belied his prez campaign
he had to know before he started
love would leave him broken hearted!

More info, images, and videos are available at Dreamyfish Art, Two Hours You'll Never Get Back, Secret Moon Art, and my 'flagship blog' Stars Over Washington where you may discover many things such as articles on the natal horoscopes of Herman Cain, Newt Gingrich, Mitt Romney, and other political thespians who thrill and chill.

Soon to be published at SO'W is the Horoscope for Winter Solstice 2011, set for the White House.

Meanwhile, if you get a bit lost while moseying around SO'W, simply scroll to the sidebar Search Field and type in the name of your candidate of interest, or topic of choice. Note that neither thrills nor chills can be guaranteed by this blogger!

Our comedians are really going to miss the Hermster!